How the program works — and how it changes under Obamacare 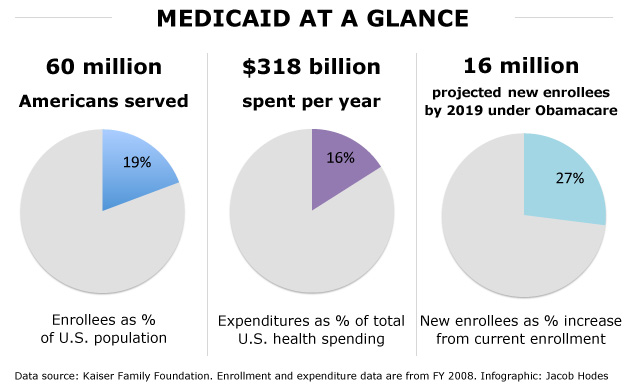 Medicaid — it’s a health care program for the poor. Right?

That’s the extent of what many of us know about Medicaid, one of the country’s largest and most expensive social programs, and one which will expand dramatically over the next decade if President Obama’s health reform law withstands the scrutiny of the Supreme Court. If now seems like a good time to learn more about Medicaid, here’s a quick primer.

It’s a government program that provides basic health insurance to many of the nation’s neediest people: poor children and some of their parents, as well as the elderly and disabled.

Whom does it cover?

Medicaid serves 60 million Americans each year, according to a recent study by the Kaiser Family Foundation. Half of all Medicaid recipients are poor children. A quarter are adults in low-income families, and another quarter are the elderly or disabled.

The federal government sets guidelines for Medicaid, but the program is administered by the states. Each state has some flexibility in deciding how to run its Medicaid program and who will be eligible for its benefits.

States are not required to participate, but if they do, they receive federal matching funds of 50 percent or more to help defray the costs of their Medicaid programs. Because of the rising cost of health care, Medicaid now accounts for 43 percent of all federal dollars sent to the states.

How much does the program cost?

Total Medicaid costs, including both state and federal expenditures, were $318 billion in fiscal year 2008. This represents 16 percent of the nation’s total spending on health care. In most state budgets, Medicaid is the second-largest expense, after education.

Congress created Medicaid in 1965, as part of the same legislation that launched Medicare, which provides health insurance for the elderly. The bill, which was a centerpiece of President Lyndon B. Johnson’s Great Society program, went through more than 500 amendments before passing both houses of Congress by wide, bipartisan majorities.

What are the politics of Medicaid?

“Medicaid is politically vulnerable,” explains law professor and Medicaid expert Timothy Jost. Because many of the program’s beneficiaries do not vote, the program has less built-in political protection than Medicare, whose recipients vote and lobby effectively.

Democrats and Republicans have presented sharply differing visions of Medicaid’s future. Last year, the Republican budget developed by Rep. Paul Ryan of Wisconsin proposed cutting Medicaid expenditures by $1.4 trillion over the next decade and transforming the program into a set of fixed-value block grants. President Obama’s Affordable Care Act, meanwhile, authorized a major expansion of Medicaid.

What happens under Obamacare?

Unless the Affordable Care Act is ruled unconstitutional by the Supreme Court this summer, millions of poor adults will become newly eligible for Medicaid in 2014.

Currently, while all poor children qualify for Medicaid, only a fraction of their parents are eligible. Poor adults without children generally do not qualify, although the details vary by state.

Beginning in 2014, the Affordable Care Act will expand Medicaid to provide a baseline coverage option for all Americans who earn 133 percent or less of the federal poverty line — whether they are young or old, married or not, with children or without. By 2019, Medicaid is expected to gain 16 million new enrollees.

Where can I learn more?

A good place to start is the Kaiser Family Foundation, a respected, non-partisan heath policy center that provides a range of educational materials at www.kaiserEDU.org. The federal government’s Medicaid portal, Medicaid.gov, provides a wealth of information. Details about New York State’s Medicaid program, including eligibility requirements and how to apply, are available on the state’s Department of Health website.

Note: unless otherwise noted, facts and figures cited above are provided by the Kaiser Family Foundation, which compiles data and conducts studies on state Medicaid programs.