In the jargon of the medical world, doctors practice “primary care” or they “specialize.” The specialists take care of things like your brain, heart, intestinal tract and feet. The primary-care physicians are your family doctors. They take care of everything.

In New York City, we are told that primary care is in crisis. That is what we set out to explore in this series of articles, and we discovered that we were told right. New York’s primary-care doctors do not cover enough of the city now, and unless trends change, they will cover even less of the five boroughs in the future.

The city needs more primary-care doctors. But fewer young doctors are choosing to practice primary care in the city, and this means that the healthcare deserts will likely expand.

In the city as a whole, 1.1 million adults – or 18 percent of the adult population – have no regular primary-care provider, according to a recent city study. 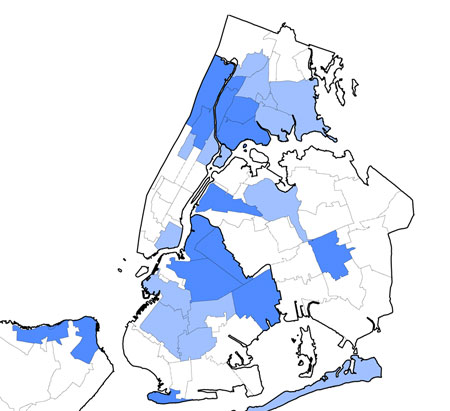 Large swaths of New York City are classified as Health Professional Shortage Areas by the U.S. Department of Health and Human Services. Click the map for a more detailed view.

By 2030, the city will be short several thousand additional primary-care providers, according to a recent study by the Center for Health Workforce Studies at SUNY Albany’s School of Public Health. (Its researchers predict the additional shortage will fall between 1,200 and 3,200 doctors, depending on factors such as economic growth, future healthcare reforms and consumer behavior.)

“If we don’t do something, we’re going to have a really big problem,” said Gaetano Forte, a researcher at the center and an author of the study.

It won’t be easy to turn that trend around, because as older doctors retire, fewer young doctors are choosing to practice primary care in the city. These young doctors know that they will make much more money if they specialize.

If recent medical school graduates do choose to practice primary care, they are more likely to do so in wealthy communities, where patients can either pay more or have more generous insurance policies. Others are leaving New York or finding jobs as internists at hospitals, rather than practicing in the community-based clinics where they are needed most.

So here is the healthcare environment facing the city within the next couple of decades: a shrinking forest lush with world-class primary care, and an expanding desert of poor and not-so-poor people who can expect haphazard care and long lines at the clinic or emergency room.

With vast disparities in income and access to insurance, New York is a perfect crucible for healthcare problems. In our series of stories, you will read that ambulances are overused and emergency rooms are overcrowded. Women all over the city find it difficult to obtain affordable birth control by prescription. And health clinics are overburdened.

The community-based clinics that serve these areas, where a majority of the city’s more than 3 million Medicaid patients live, cannot meet demand. So, in the city’s desertlands, New Yorkers without access to primary care are using ambulances and emergency rooms for routine medical needs.

In 2011, the city’s 911-dispatched emergency services responded to more than 1.2 million calls citywide. Of these, nearly three in four were not life threatening. “We’re a taxi half the time,” EMT Stephen Katz told us. By law, the ambulances cannot turn patients away.

In the city’s emergency rooms, staff members talk about “frequent fliers” — patients who show up often for minor problems. “You see a lot of people coming here who don’t necessarily need to,” said Kimberly Gordon, 29, a nurse practitioner at Lenox Hill Hospital’s emergency department. “It’s a problem, but it only seems to be getting worse because we have no choice but to treat them.”

The need for more primary-care doctors is clear, and demand may grow. The Affordable Care Act, or Obamacare, provides funding for several new primary-care initiatives. And by bringing previously uninsured patients into the system, it may exacerbate the doctor shortage. (The Supreme Court will rule on the act’s constitutionality in June.)

Nonetheless, in medical schools students are voting with their feet for other specialties. Healthcare leaders in the field complain that most of the country’s major medical schools steer students elsewhere. From 1998 to 2008, the number of family medicine residencies declined by 400, while those for such specialists as cardiologists and oncologists increased by 1,150.

“There’s every reason not to practice primary care,” said Greg Katz, a recent graduate of New York University’s medical school who is still wrestling with his career decisions. He ticked off the problems: other specialties provide more prestige, better working conditions, and higher pay. Specialists make $400,000 or more, according to a study by the Kaiser Foundation. Most family doctors make less than half that.

The search for solutions

Any healthcare professional in New York City will tell you that something has to change. For one thing, the city has to attract more doctors to practice in its poorer precincts. The city’s Health and Hospitals Corporation recently announced $11 million in scholarships for city residents who attend St. George’s University Medical School, in the Caribbean nation of Grenada, and agree to return to practice as primary-care physicians in the city’s public health system.

That’s only one effort to improve city health services. In addition, a mentoring program is encouraging local medical students to consider a career in family medicine.

Many analysts say the bottom line must be more money. Primary care will have to pay more to entice a new generation of doctors.

Another experiment attempts to reduce the unnecessary use of ambulances. Reformers hope to create a system of “community paramedics,” who would visit the frequent fliers and encourage them to seek better overall healthcare.

Clinics are testing a model of care called the “patient-centered medical home,” which advocates say provides better outcomes at lower costs by taking better care of patients and keeping them out of the hospital.

At Montefiore Medical Center, in the Bronx, Medicare is sponsoring a similar experiment in collaboration, known as an Accountable Care Organization. If successful, the approach could spread across the country.

All of these initiatives may be part of the solution to the primary-care crisis. Many analysts say the bottom line must be more money. Primary care will have to pay more to entice a new generation of doctors.

Various proposals are circulating. The American Academy of Family Physicians calls for increased federal funding for medical-school departments of family medicine, increased payments to family physicians for clinical services, and insurance reforms that lead to higher payments for primary-care services.

Beyond questions of pay, primary-care providers will remain a special kind of doctor. The best of them communicate easily with their patients, don’t mind working long hours, and have the sense and creativity it takes to make good diagnoses.

Norah Garry, 28, a student at the SUNY Downstate College of Medicine, sought advice from an experienced pediatrician as she debated whether to go into primary care.

Go for it, the older doctor advised.

What about all her student debt? Garry asked her. “‘I had those same loans and I made it work,’” Garry recalled her mentor telling her. “She said, ‘Base your decision on what makes you happy, not how much money you’ll make.’”

Garry took the plunge, and is now a resident at Children’s Hospital Montefiore, serving some of the toughest neighborhoods in the Bronx.

Her case gives hope that other young doctors can be persuaded to follow her into the healthcare desertlands. It suggests that one day the benefits of decent healthcare will stop withering, and start blooming throughout New York City.