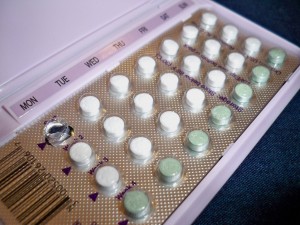 Hormones are chemicals the body makes that tell other parts of the body what to do. Hormonal birth control works by preventing women from ovulating. That means that the hormones tell the body not to release eggs from the ovaries. Since sperm infiltrating an egg causes pregnancy, taking the egg out of the equation prevents pregnancy.

All hormonal contraceptives contain estrogen, progestin (a synthetic version of progesterone), or both. The two hormones play a major role in menstruation, puberty and pregnancy.

All hormonal contraceptives require a prescription from a doctor. The pill is the most popular. According to a report by the Centers for Disease Control, 28 percent of women who used contraception from 2006 to 2008 used the pill. The pill is taken daily for three weeks, followed by a week of sugar pills, which keeps a woman in the habit of taking her pill daily while allowing for menstruation.

Other hormonal contraceptives feature the same hormones as the pill, but are used differently. A woman who uses the ring inserts it into her vagina by hand, and it stays there for three weeks. Then there is a week off for menstruation.

The patch sticks to a woman’s body, like a nicotine patch. A new patch is worn weekly for three weeks in a row followed by a week off for menstruation.

Like some pills, the implant is a progestin-only contraceptive. It is implanted into the arm, which has to be done by a health care professional. The implant prevents pregnancy for up to three years.

In the CDC report, the patch and the implant were bundled with an injectable contraceptive. They accounted for use by 1.1 percent of women, as opposed to the ring, which was used by 2.4 percent of women.

Women sometimes experience side effects from these methods. Some women will try various kinds until finding the type that has the right levels of hormones for their bodies.